Anjuna Beach in Goa India is world famous for its trance parties held on the beach during the tourist season. This is one of the most thrilling place for the hippies to get trip and dance partying full night on trance. Anjuna also hosts the famous flea market (Every Wednesday) wherein you can purchase many things, ranging from fruits to jewelry, clothes and electronic devices.

Like all of Goa, Anjuna was long held by the Portuguese. Anjuna beach is located 10 km from Calangute beach. Anjuna beach has shallow waters where you can swim. The sound of the waves hitting the rocks on the shore is enthralling. This beach is not as sandy as Baga beach, neither is the water clean – has lots of algae.

This video of Anjuna beach, Goa, India was captured during our trip to Goa in the last week of September, 2014. 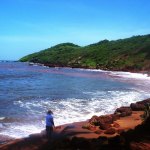